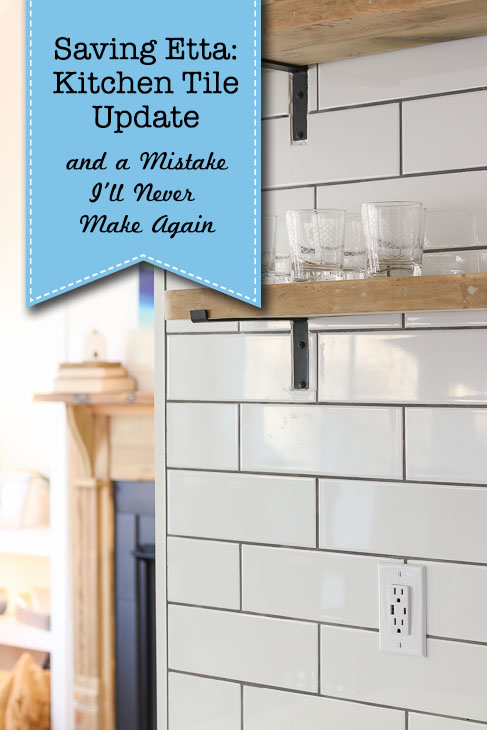 Last week you got to see how the range hood was installed (and how I averted disaster during the installation.) Today I’m sharing more kitchen updates. We’re going to dive into tiling a backsplash and one mistake I’ll never make again.

Before we get started, I want to give a big shout out to my sponsors! These brands came together to help me save Etta and I am incredibly grateful. 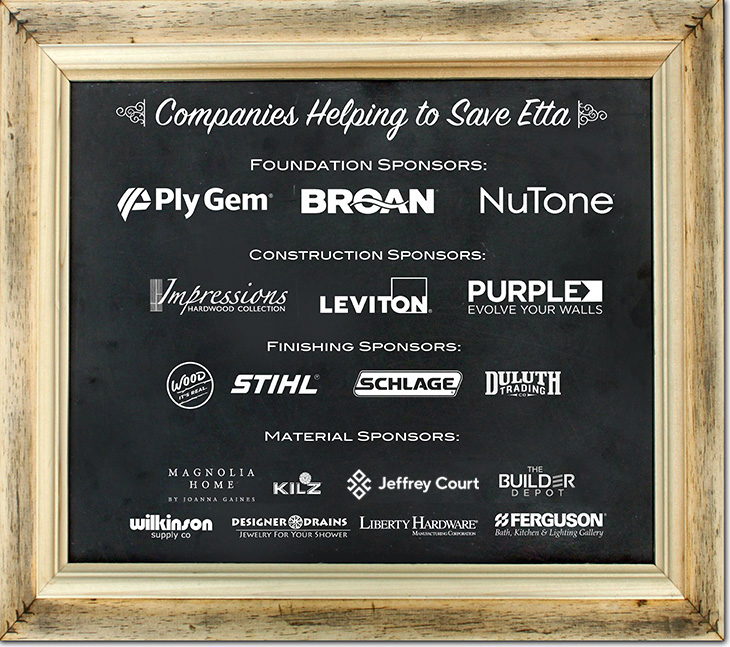 After hiring tile setters to lay the bathroom and mudroom floors, I chose to save some money by tiling the backsplash myself. After all, I consider myself fairly experienced at installing backsplashes after I tiled three walls in my own kitchen and wrote a tutorial to help you learn to tile. 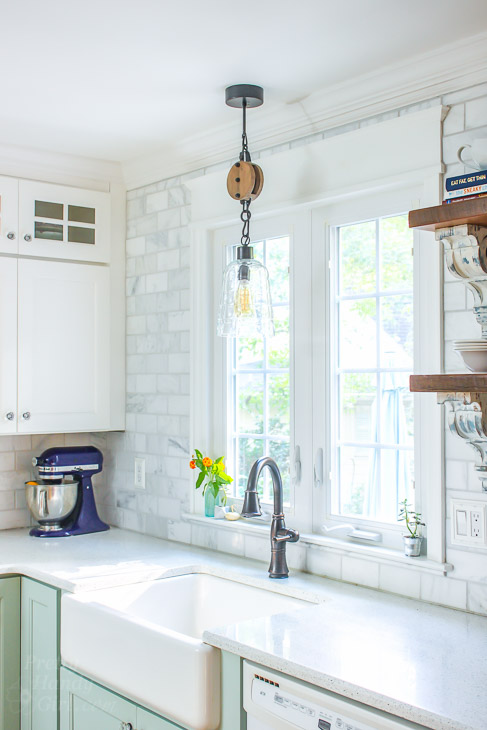 Shortly before tiling, my electrician joined me late one night to finish installing the light fixtures in the kitchen. My sons and I had already installed all the recessed can lights. But, I let my electrician handle the remaining fixtures. Especially because I was on a tight deadline to get the house finished and on the market before the holidays. 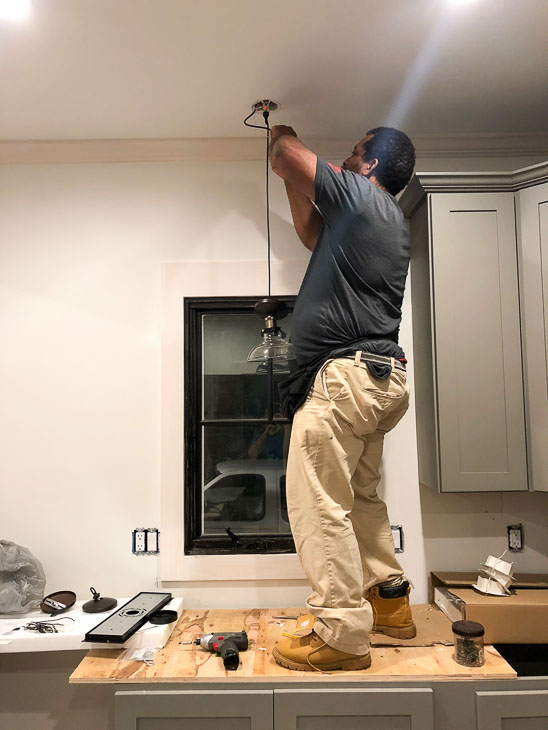 This guy standing on plywood at 9pm at night, is my knight in shining armor. Harvey has been my electrician for over six years and he’s helped me solve electrical problems on multiple occasions.  The thing I love most about him is he always pushes me to take on the smaller electrical projects myself. When I wanted to hire him to install a switch for an automatic door activated light in our pantry, he explained the process then left me with these parting words, “Call me if you get stuck.”

Most light fixture installations are straight forward and simple, but we had several issues with the lights I ordered for the Saving Etta house. One of them was missing parts to attach the hanging hardware to the canopy that attaches to the ceiling box. Harvey sent me to a nuts and bolts store. I kid you not, it was an obscure hardware store I never knew existed in Raleigh. Walking through the door, was like walking back in time. Picture Michael J. Fox stepping into the soda shop in Back to the Future. The gentleman working the counter looked at my light fixture parts and started searching through aisles of fasteners, nuts, bolts, screws, and who knows what else. Ultimately he found a nut that would work for our light. Hallelujah.

The gentleman took my credit card and I nearly laughed as he ran it through one of the old carbon copy credit card machines. If you’re too young to know what this is, I leave you this video for your education. For the rest of us, enjoy a trip back in time.

Back at the house, Harvey had finished installing the pendant light over the sink. But, something looked off. The pendant shade wouldn’t hang level no matter what we tried. Ultimately, I took it down and replaced it with a modern geometric pendant and pendant light kit from Lowe’s. In my opinion, the light is perfect for the modern farmhouse look I was envisioning for Etta. 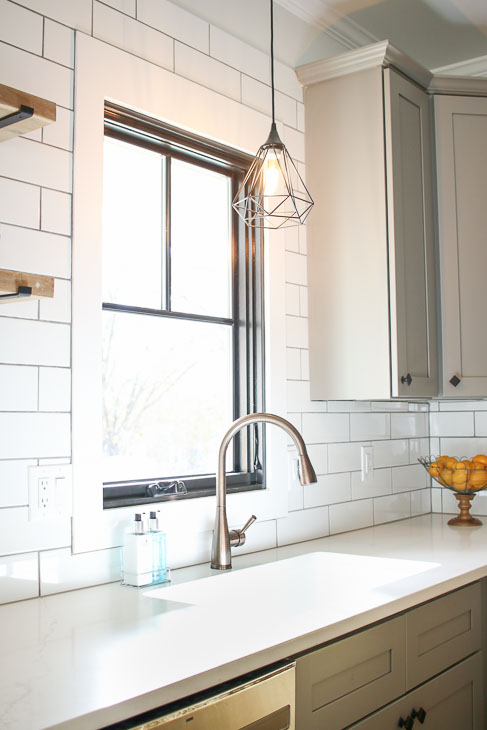 After the cabinets and range hood were installed it was time to call the countertop fabricators. The owner arrived and took measurements, then he sent me to look at slabs in the local granite and stone warehouse. I took my youngest with me and we watched in awe as a huge robotic arm lifted giant slabs of quartz and granite for customers to view. You can join us as we are looking through the slabs in my Facebook Live video:

Can I share something with you? I’m not a big granite fan, although I saw some amazing slabs at the warehouse. Instead of granite, I chose a marble looking quartz. The quartz is called Carrara Venatino from Cosmos. I think Cosmos has it manufactured especially for them. If you like the countertops, you can see if there is a Cosmos distributor near you. 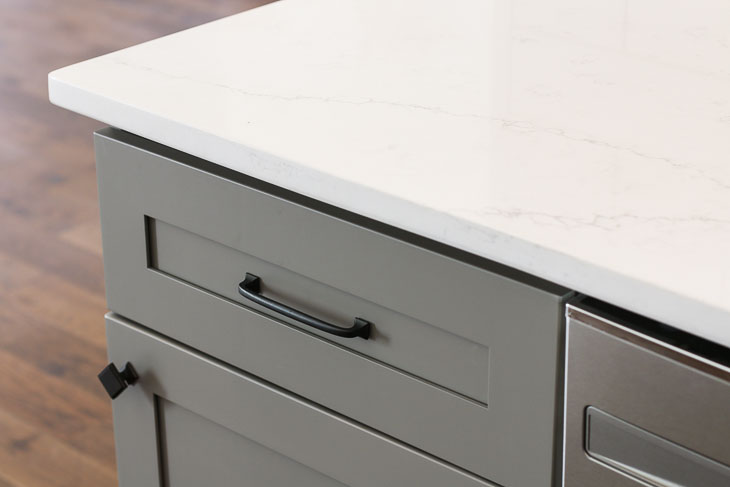 The countertops are one of my favorite finishes in the kitchen. I almost wish I had used them in our own kitchen instead of the recycled glass quartz countertops. My only complaint about the Carrara Venatino is it tends to scuff easily. Belt buckles and rivets leave gray lines that look almost like pencil marks on the edges. It’s not a huge deal as they seem to wipe off with a rag and some cleanser.

The backsplash turned out beautiful and definitely attracted a lot of attention in this open concept kitchen. I used Jeffrey Court 4″ x 12″ white subway tiles from Home Depot. The subway tiles have a timeless classic look and the larger size meant the install was a little faster than standard 3×6 subway tiles. 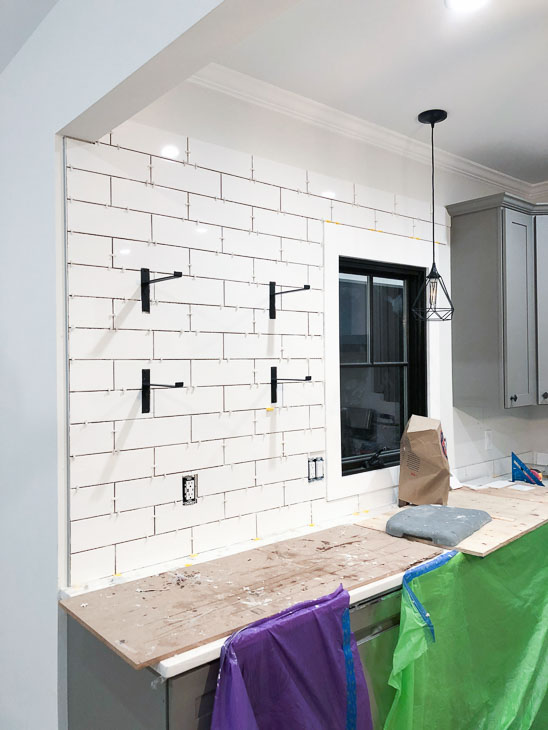 There were two particular evenings I stayed crazy late. I had to bust my butt to finish the tiling. Pretty Handsome Guy came one night to help, and brought Jersey Mike’s for dinner (see if you can spot my ingenious use of the trash as a faucet cover). The hubby got a crash course on using the wet saw and after about a dozen practice cuts, he finally got the hang of cutting tiles. (He still has to pick up some more skills before he can have the name Pretty Handy Guy. Have I mentioned he’s not the handy person in this marriage?) But, without his help I might still be tiling that backsplash! (Okay, that might be a bit of an exaggeration.)

Tiling can be a solo job, but it really helps to have one person cutting the tiles and the other one setting them. Especially because the thinset will eventually harden. At least the hardening process was slowed by the cold temperatures inside the house and out. (We still didn’t have the gas hooked up for the heat yet.)

The second night I worked by myself until about midnight. By the time I left, I was cold, tired, and sore. Climbing up and down on top of countertops is tough work. But, also rewarding as you can see by this progress after the first evening. 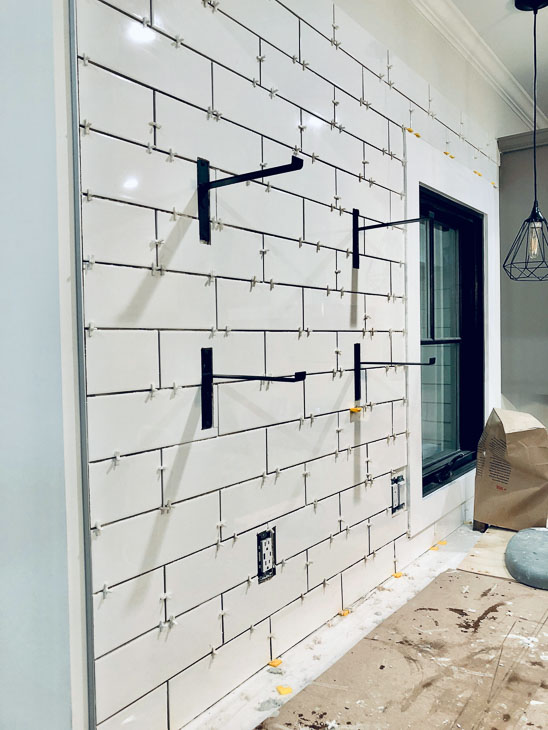 Having open shelving in the Saving Etta kitchen was a no brainer. In my own kitchen I have two open shelves and I love them! For my shelves, I installed corbel shelf brackets after the tile was installed. 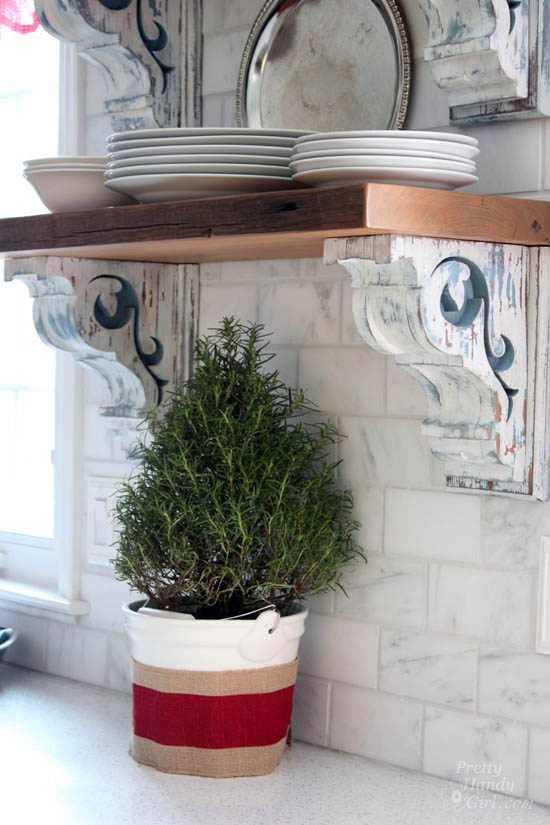 I was planning on doing the same at the Etta house. But, shortly before tiling I stumbled across a tile setter on Instagram who had installed the shelf brackets before tiling. Thinking this guy was a professional and knew what he was doing, I decided to try doing the same thing. After all, it would be easier to locate the studs and blocking before tiling. Truth be told, I had added blocking in the wall where the shelves were going to be mounted, and took a picture before the drywall was hung. (Smart, right?!) 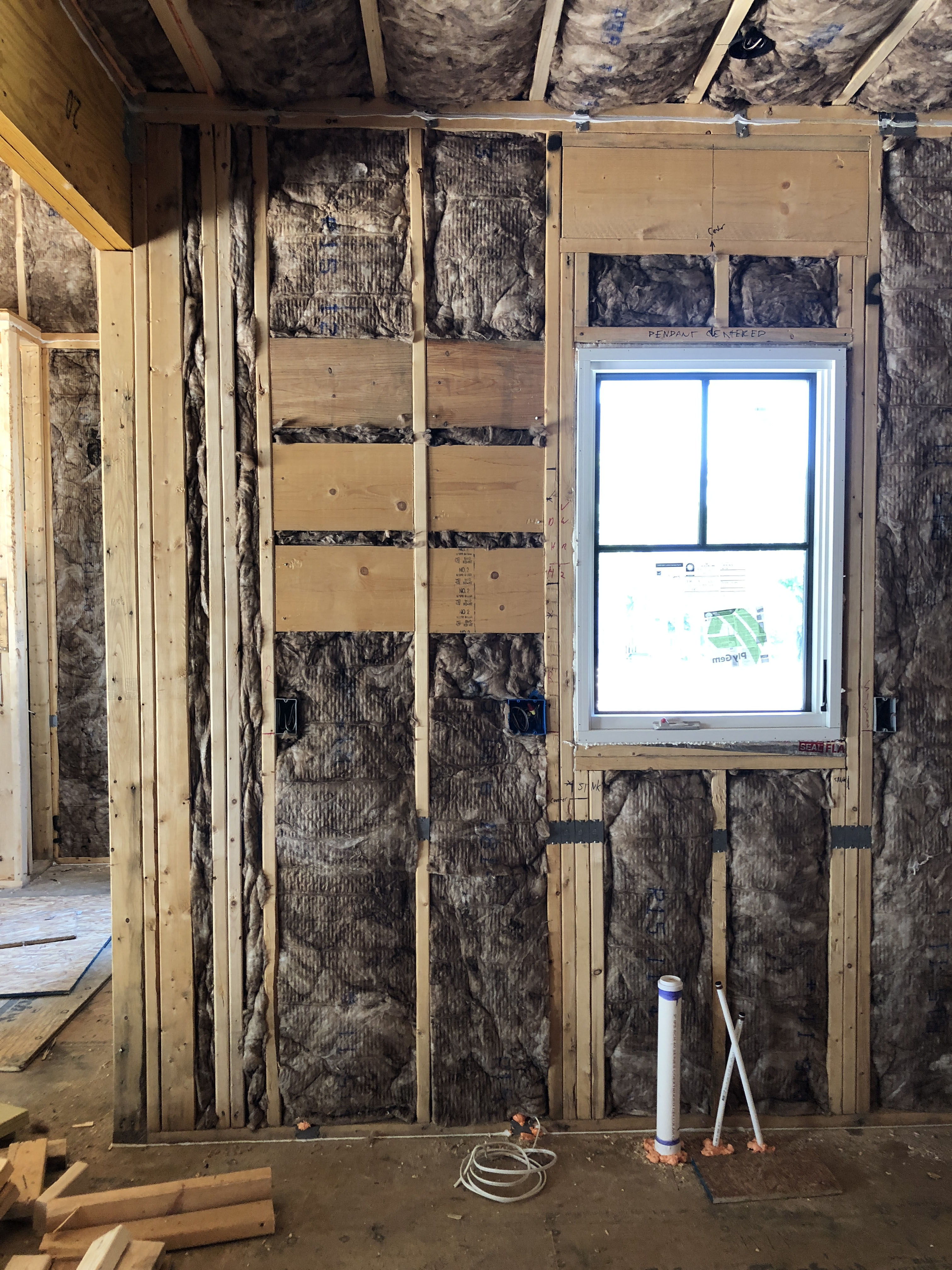 Continuing my claim of having smart ideas, I decided to put a paint stick behind the shelf bracket before securing it to the wall. This would insure the bracket would be at the same depth as the tiles. In theory it seemed like a good idea. Can anyone guess what my mistake was? 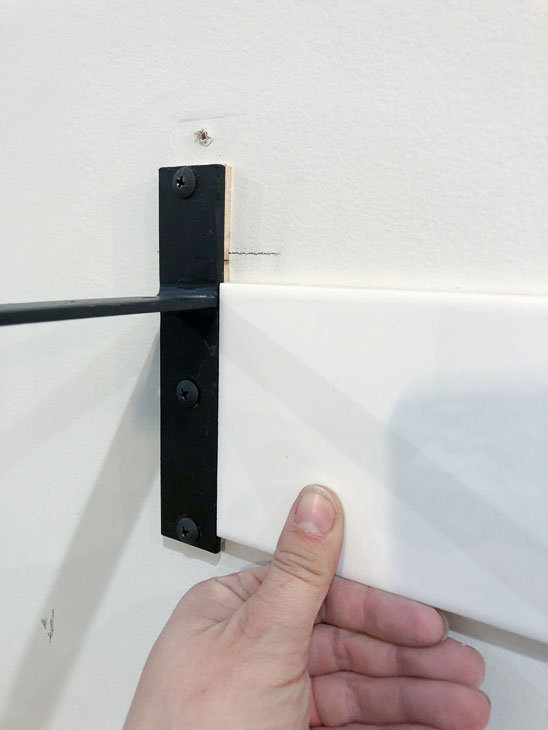 There were actually two issues. The first was I failed to allow for mortar thickness. Depending on the size notched trowel you use, the thinset can add anywhere from 1/8″ – 1/4″.  I guess I can be thankful at least I put something behind the brackets or they would have been horribly recessed.

It wasn’t until I began grouting that I realized the second issue with installing the shelf brackets first: sloppy cuts. 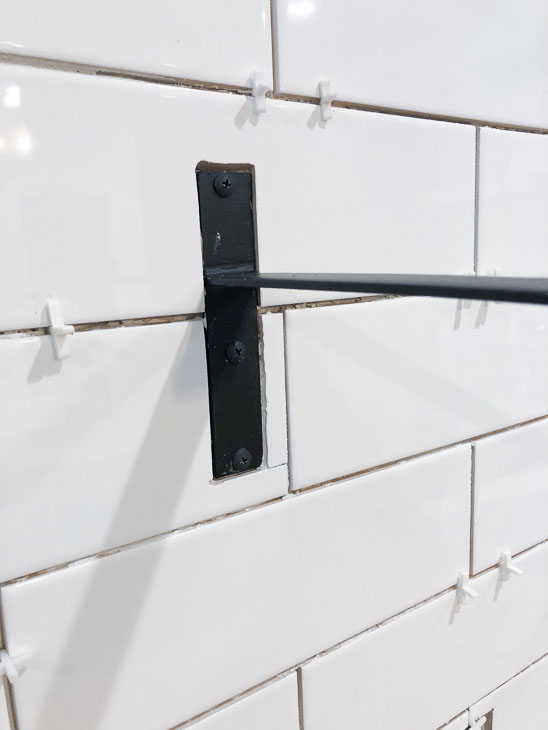 Cutting tiles is not like cutting wood. Where it’s fairly easy to cut shapes in wood, it’s not that easy with tiles. Making perfect 90˚ cuts into tile is tough. As you can see above, I had one tile that needed to be notched. The small leg on the right kept breaking. So I ended up piecing the tile around one of the brackets.

I will never make the mistake of tiling around brackets. Next time I will tile first and install the shelf brackets afterwards. (In case you are wondering, these are the brackets I used. They are sufficiently strong to hold shelves with glasses and dishes, but I wouldn’t use them to hold super heavy items like hand weights.)

The next day I finished tiling around the range hood and was able to grout the wall with the open shelves (but needed to wait for the newly set tiles to cure overnight.) By the end of day three I had completely tiled and grouted the backsplash! 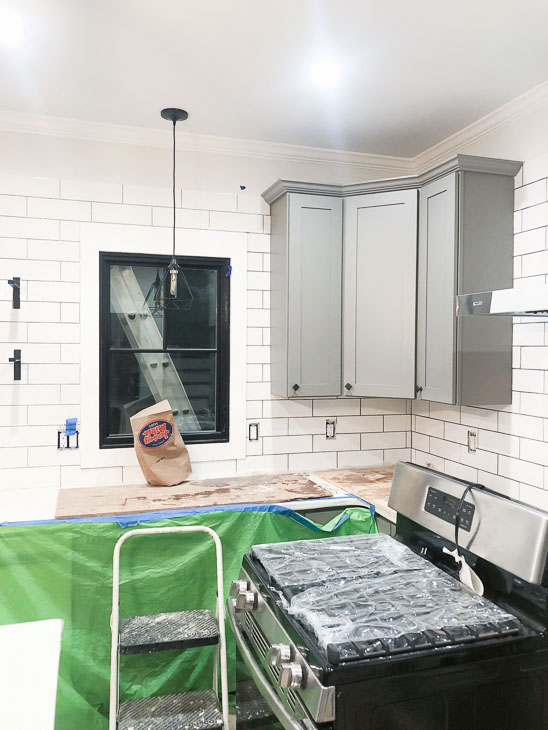 Despite the few cut tiles around the shelf brackets, I am pleased with the backsplash. I’m keeping you in suspense with the rest of the kitchen reveal until Friday. But, here’s a close up of the tiling around the brackets. It looks okay from a distance, which is all that really matters, right? 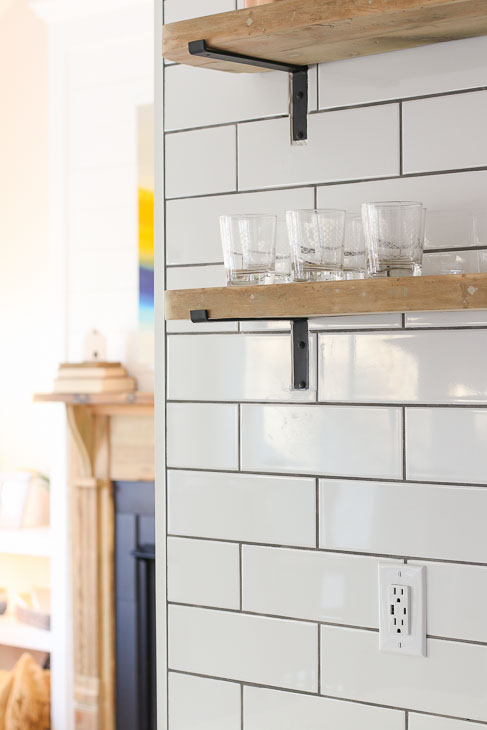 Stay tuned, the next Saving Etta update will be the full kitchen reveal and I can’t wait to share it with you!!!

Disclosure: I worked with Jeffrey Court for Home Depot on this project. I was provided with the subway tiles for the kitchen backsplash. I will always let you know if I was sponsored or compensated. You should also note that I’m very particular about the brands I work with.