In the two decades we’ve lived in Raleigh, we’ve learned the Absolute Easiest Way to Get Rid of English Ivy. No back-breaking pulling or bending over. This is truly the best way to remove English ivy. 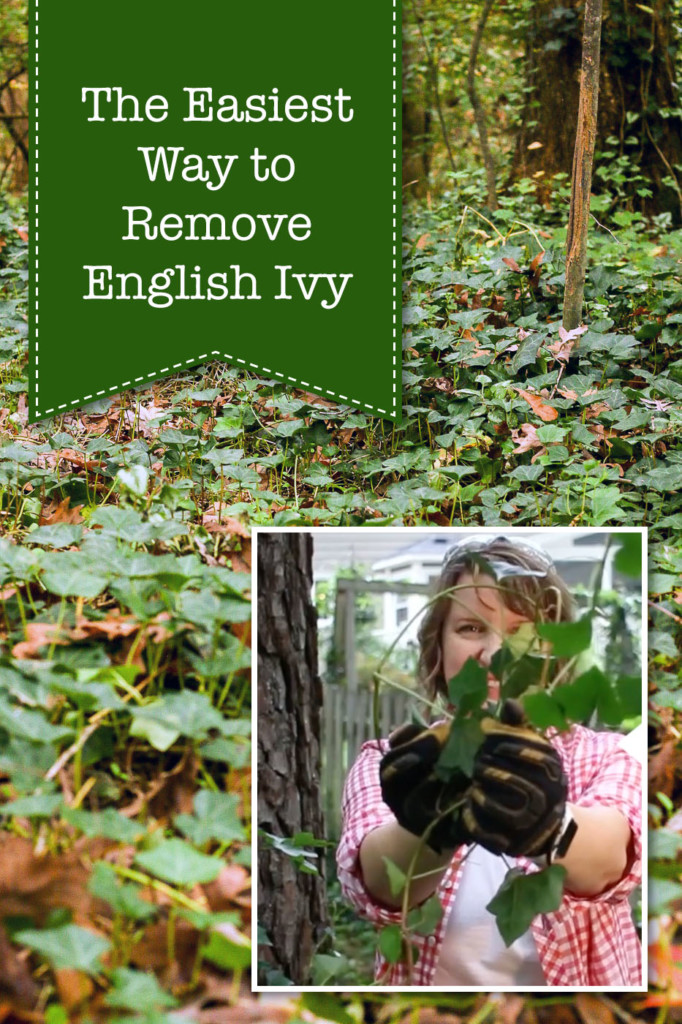 Easiest Way to Get Rid of English Ivy for Good

We are fortunate to have a beautiful yard that backs up to a forest of trees and a creek. We love the greenery and nature at arms reach, but we also have a beast that’s been spreading its destruction and darkness in the woods and recently it was spotted in our yard again.

This predator creates a safe haven for rats, mice, spiders (non-venomous and venomous), mosquitoes, termites, and snakes (yes, we’ve found several copperheads hiding in it)! What is this awful horror-inspiring thing? Hedera helix or more commonly referred to as English ivy.

If you haven’t learned the dangers of this plant, let me give you an ivy league education in the dangers of uncontrolled English ivy. If you live in the Pacific Northwest, California, or southeastern states (including the Carolinas, Mississippi, Tennessee, and Virginia), English ivy is considered an invasive species because of how quickly it grows and how difficult it is to control.

Homeowners mistakenly plant English ivy and let it run wild thinking it’s a great ground cover. But, little do they realize when not contained in a pot, this plant can soon cause serious problems if left unchecked. When grown in the yard, this plant can cover the ground not allowing native species to thrive. It is a real problem when it reaches the trees. The vines can strangle the roots of a tree and can cause damage to the bark, plus it adds excess weight to the tree. 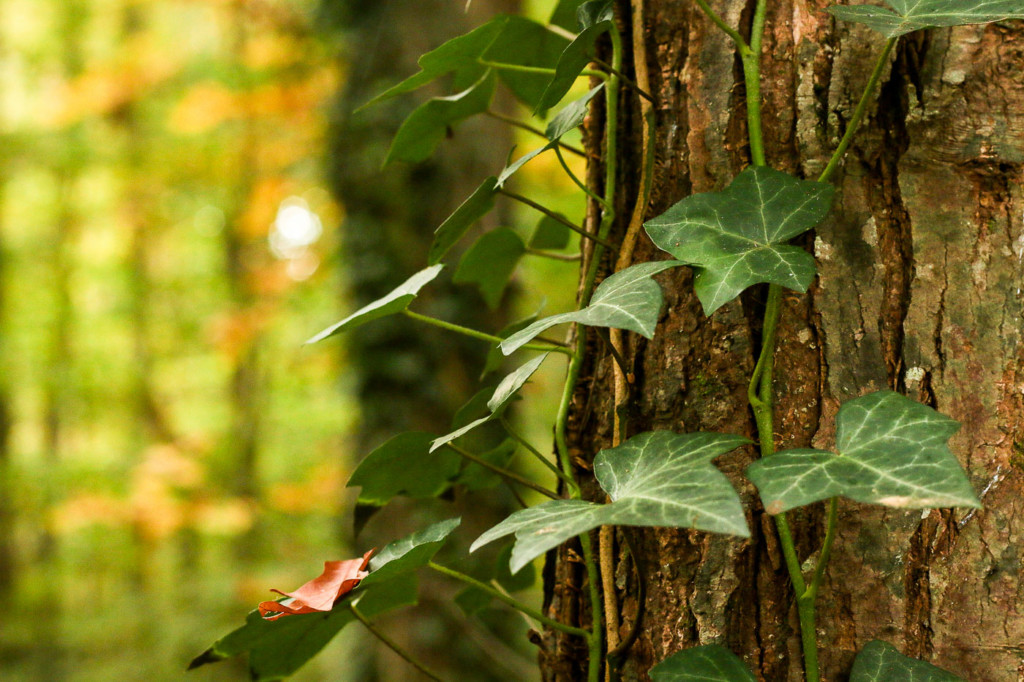 Once ivy reaches a mature age, it sends out flowers and berries. Ingestion of berries or leaf material in may cause mild gastrointestinal issues in small doses. Eating larger amounts of the plant can cause breathing difficulties, muscle weakness, coordination problems, fever, hallucinations, and even coma. 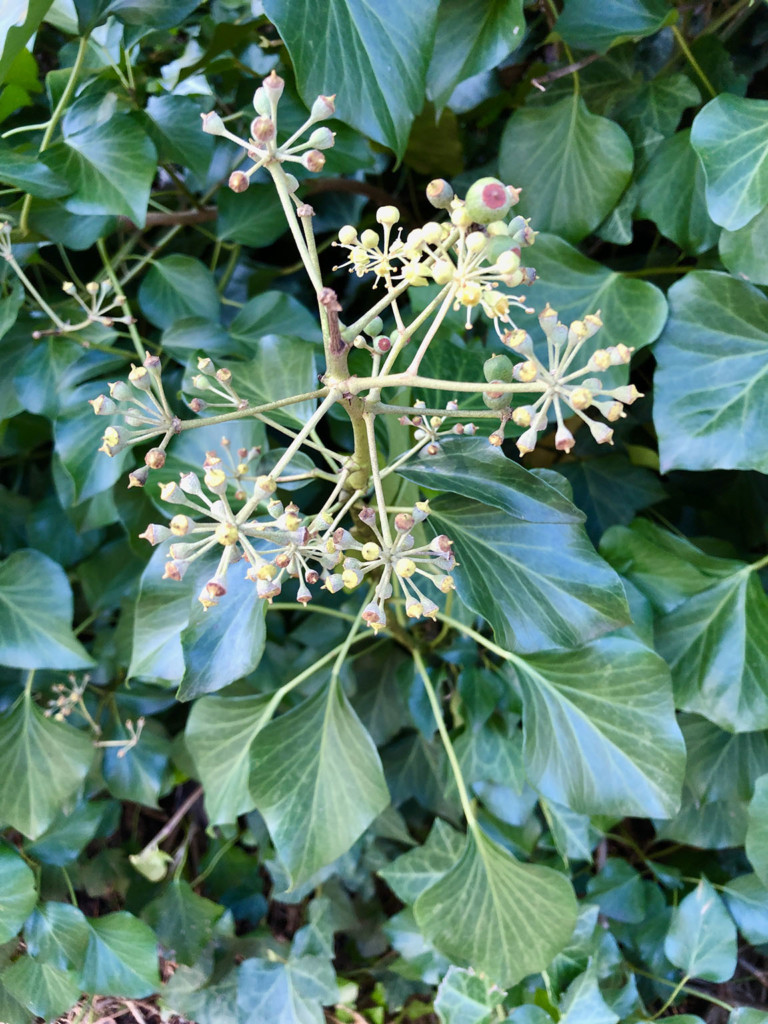 Once berries form, birds will eat the berries and deposit seeds in their droppings. That’s all it takes for more ivy to grow. Think about the issues this causes when English ivy begins to grow unchecked in a state park, national forest, or wooded yards? 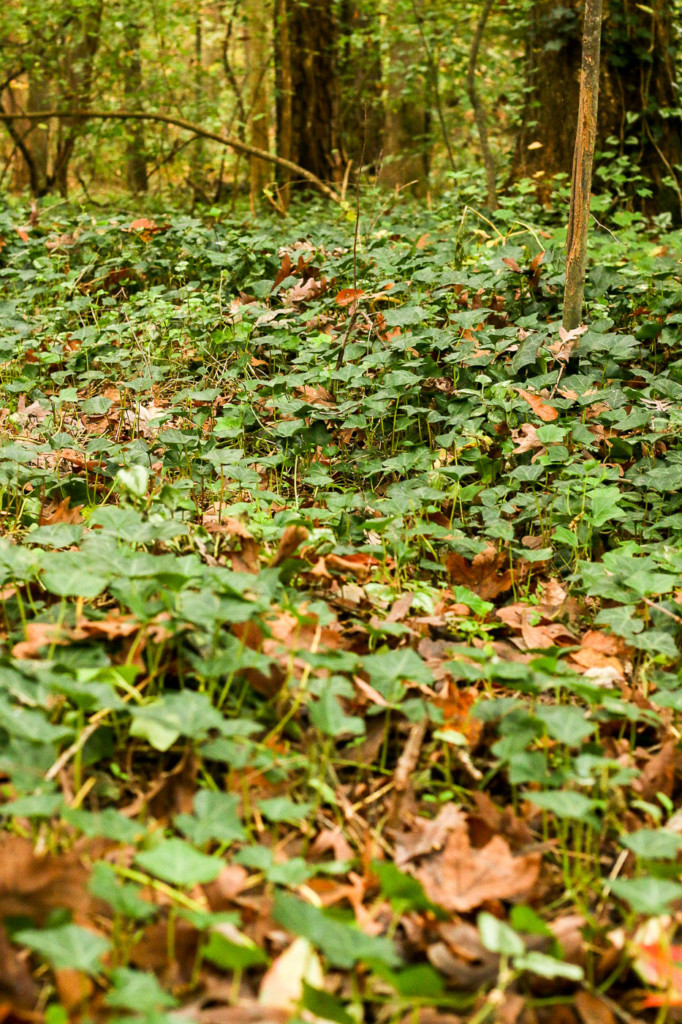 That small patch of ivy you planted as ground cover could cause far-reaching issues!

But, Ivy Covered Houses are So Pretty!

What happens if you want to decorate your brick house with ivy? Believe it or not, English ivy can cause property damage as well. Although it looks pretty on the surface, underneath it’s hiding an ugly secret. The roots of the ivy dig into the softer mortar of your brick wall and weaken it. This allows moisture to get into and behind the brick. Ivy shoots can easily grow bigger in these weak spots and will worm their way into windows and under siding. As ivy stems grow thicker, it expands and causes more damage. 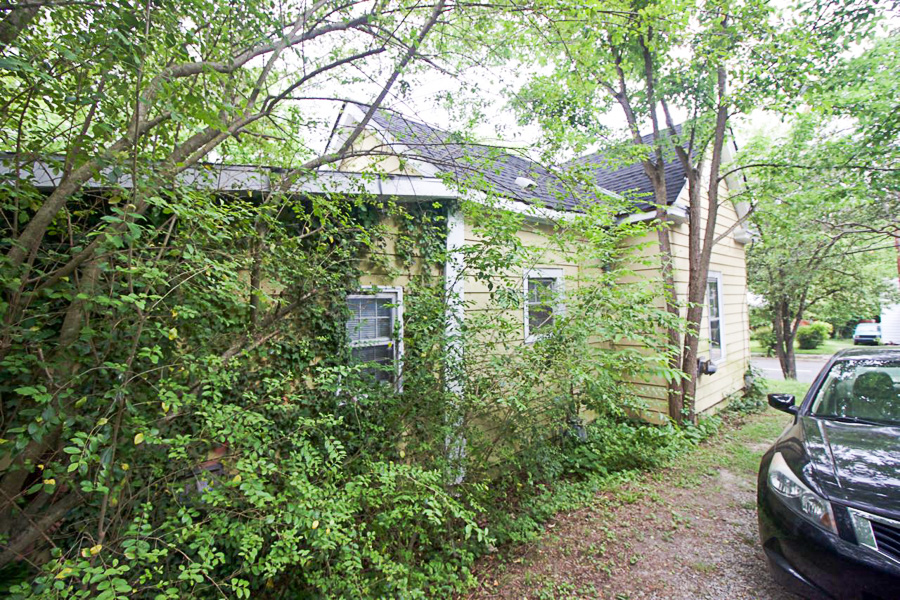 Have I given you enough evidence to keep you from planting English ivy in your yard? If you already have English ivy, I hope I’ve convinced you to remove it permanently!

But, before we get to the procedures you’ll need to get rid of English ivy for good, you should know this is a sponsored post for STIHL. I’ve worked with STIHL before to tame the wild and unruly yards of the properties I purchase to flip and renovate.

Today I’m fighting against ivy to protect my trees, my house, my kids, my dog, and my property! I’m taking matters into my own hands and I’m breaking out the big guns. 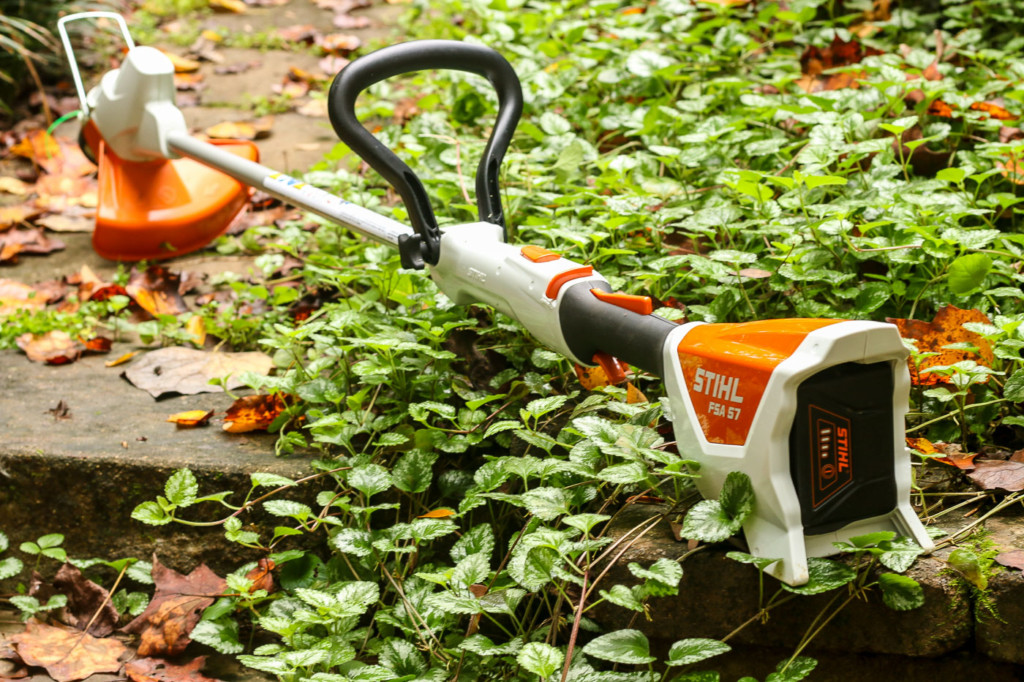 The STIHL FSA 57 battery-powered string trimmer is the perfect tool to fight back against invasive English ivy. It may look big, but weighing in at only 7.5 pounds, this string trimmer is very comfortable to use.

If you have a flat area that doesn’t have any dangers underneath like rocks, sticks, or logs you can speed the task by using a mower like the RMA 460 battery-powered mower. I’ve previously written my review about the RMA 460 mower, and I stand by every word I wrote. It’s still our favorite mower. 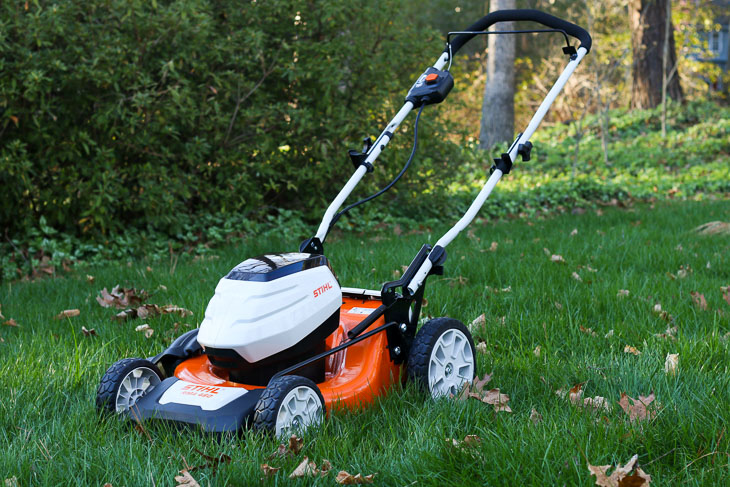 Besides the string trimmer and the mower, I’m actually in love with their entire line of AK battery-powered tools.

Easiest Way to Get Rid of English Ivy FOREVER:

To help you get started on the right foot, I’ve put together this video tutorial to show you the easiest way to eradicate English ivy. We’ve learned from experience that pulling it at the roots can be time-consuming and a real back-breaking chore. But, I hope you’ll learn from our experience that it doesn’t have to be a physically exhausting chore.

Let me first start by saying, this battle is a tough one, and you’ll need to gear up before going to battle. Remember what I said about the ivy being a haven for spiders, snakes, and rodents? Need I say more? This is the protective gear you should wear before starting this landscaping task. 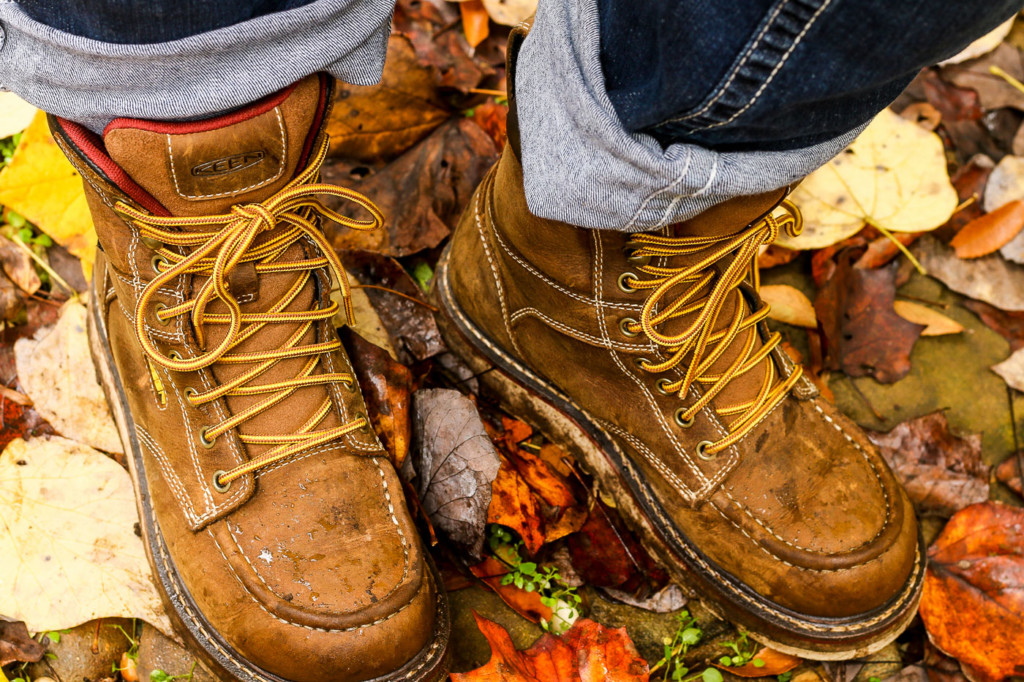 Tools to Get Rid of English Ivy: 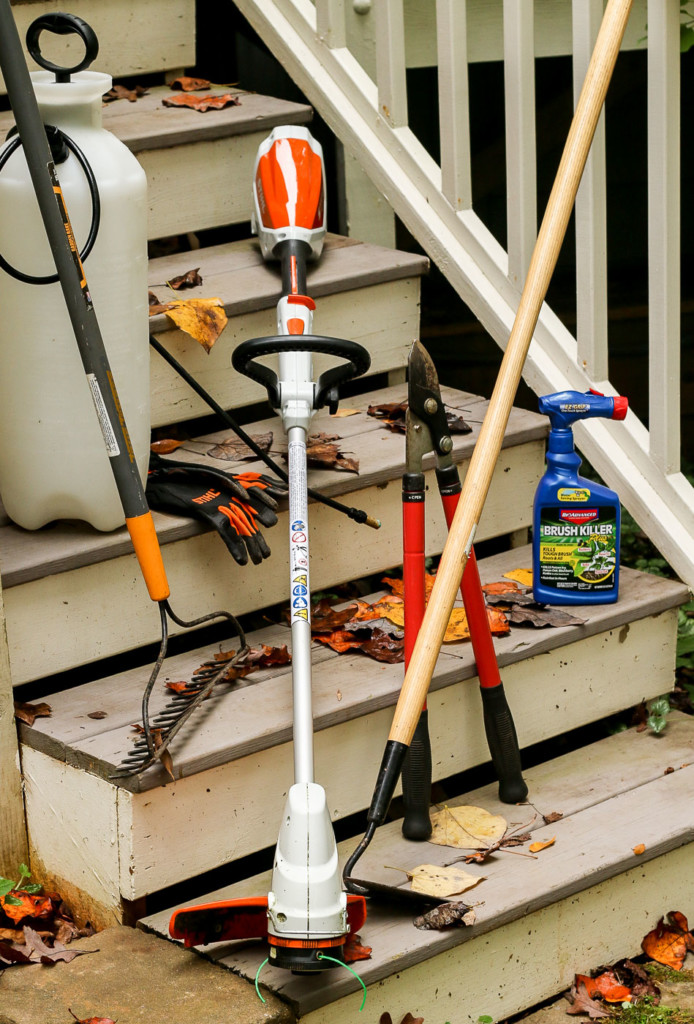 (This is a tutorial on removing English ivy, you don’t want to use the same method for poison ivy as cutting it will spread the poison ivy sap and could cause a hazardous reaction.)

Ivy has a waxy leaf that is highly resistant to herbicides, therefore it’s best to score or cut the ivy before applying your choice of an herbicide or vinegar. You can use a string trimmer to cut the leaves off the ivy. This will create an open would and allow the plant to absorb the herbicide more easily. 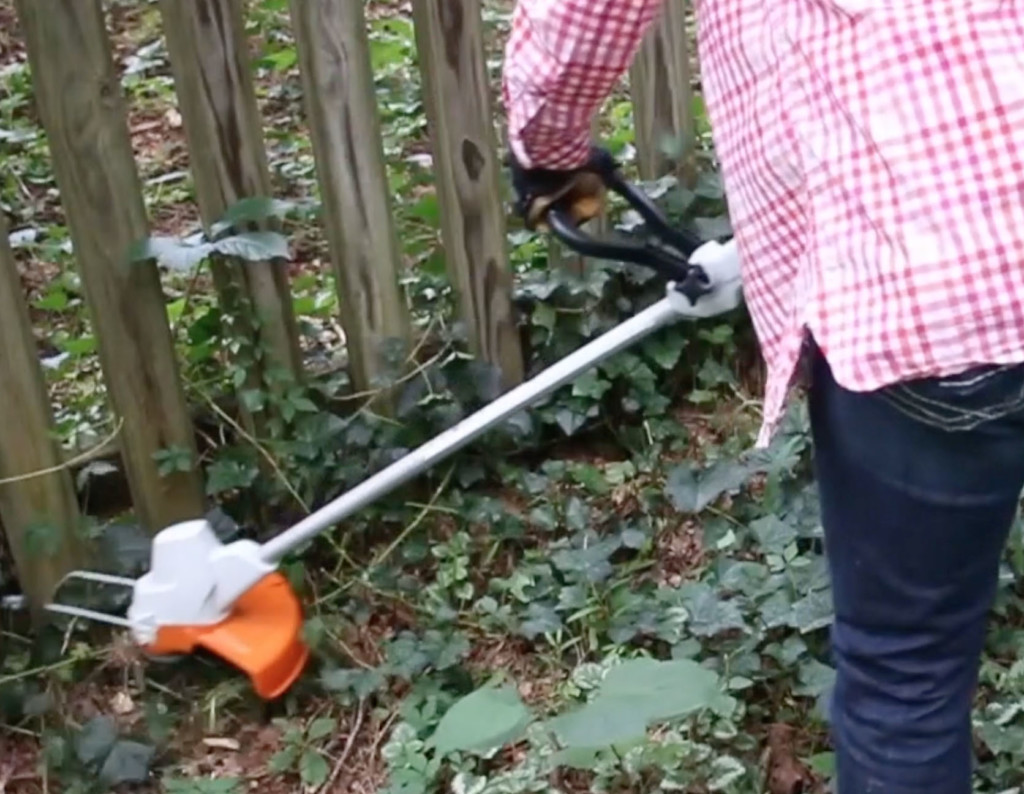 To speed the task of cutting, you can use a lawnmower on flat areas as long as you don’t have any hazards underneath the ivy (like rocks, large limbs, or dips in the ground.) 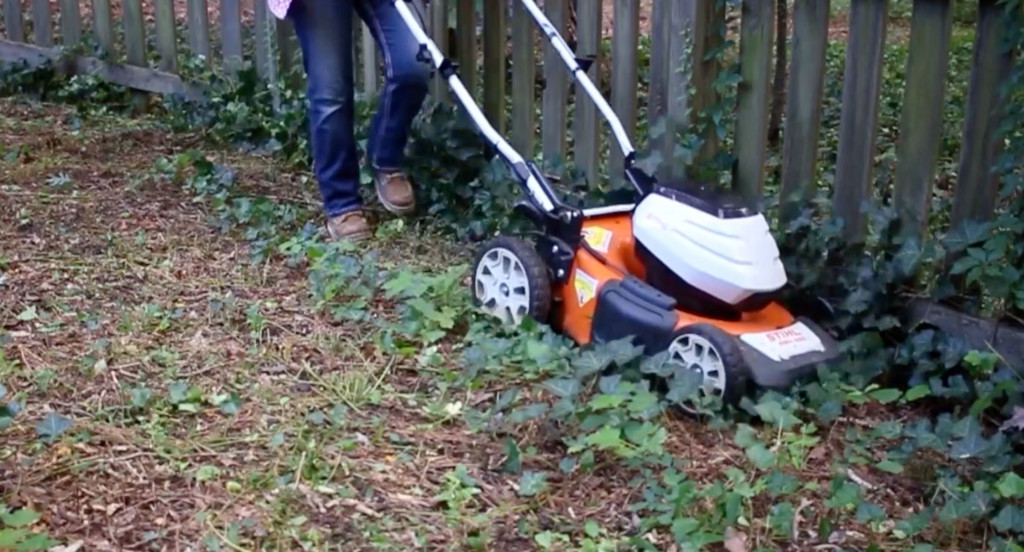 Ivy growing on trees requires a few more steps. Sever the ivy around the tree trunk using loppers or pruning shears. Then pull the ivy several feet away from the trunk of the tree. Inspect the larger roots at the base of the trunk and look for ivy growing over the roots. If you spot any, cut it to prevent the ivy from strangling the tree roots.

Resist the urge to pull the vines off the tree because it can damage the bark. Once the ivy dies the greenery will turn brown and will eventually fall off. 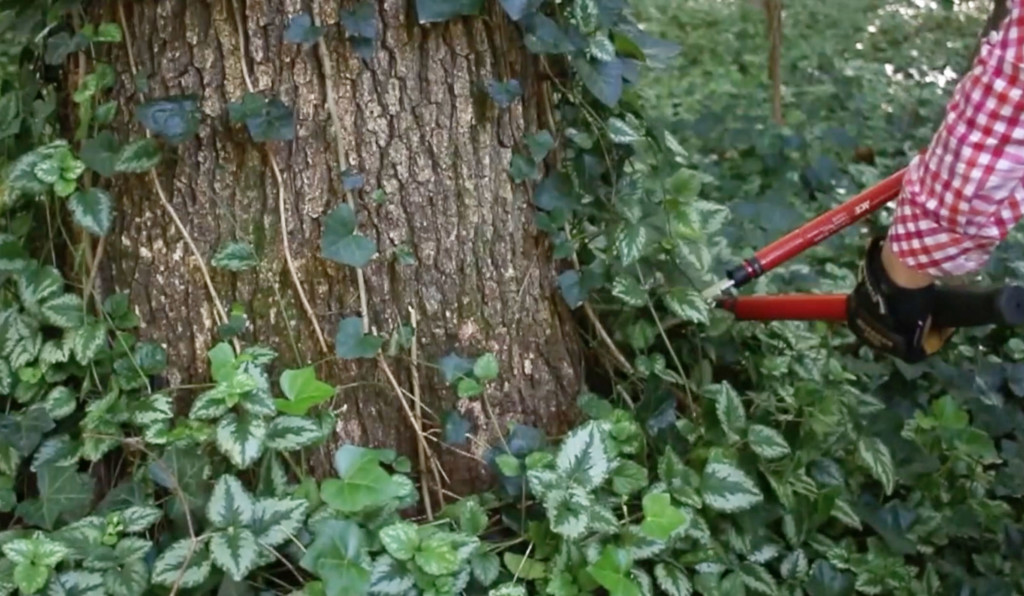 After you cut the ivy, you’ll want to follow up with an herbicide to kill English ivy. 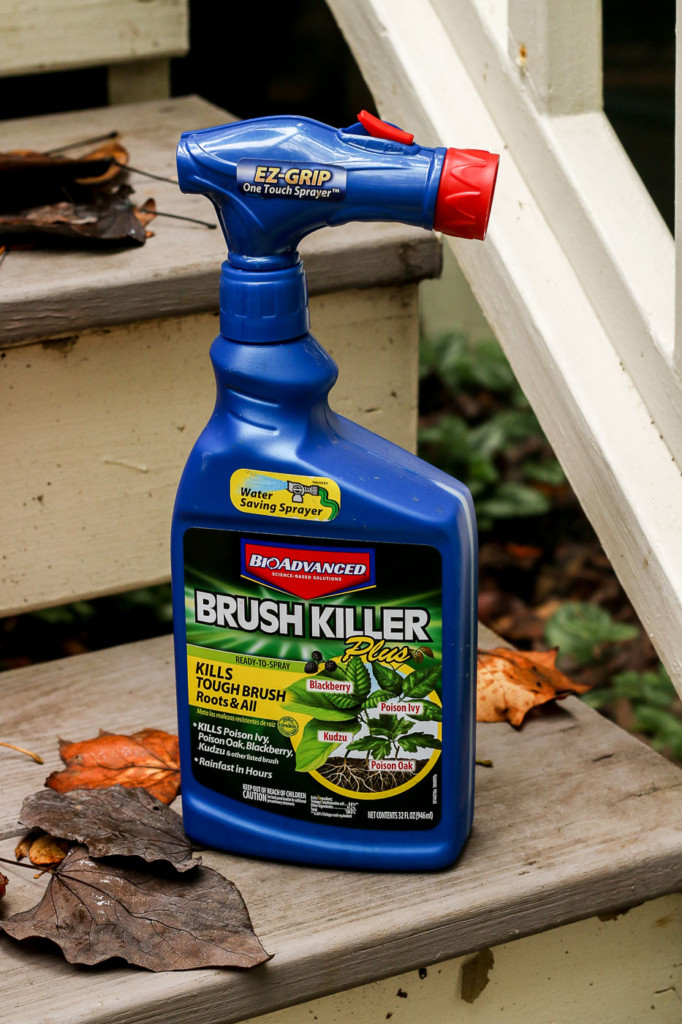 You can choose your poison (so to speak.) I’ve used herbacides specifically designed to kill ivy to eradicate the English ivy in our yard. The herbicide should contain glyphosate, triclopyr, imazapyr, or a combination of the three. This path is a little more forgiving if you get some on nearby plants or trees. But, if you want to go natural, you can use one gallon of white vinegar mixed with a teaspoon of dish soap, just be very careful not to get this mixture on any plants or trees you want to keep. 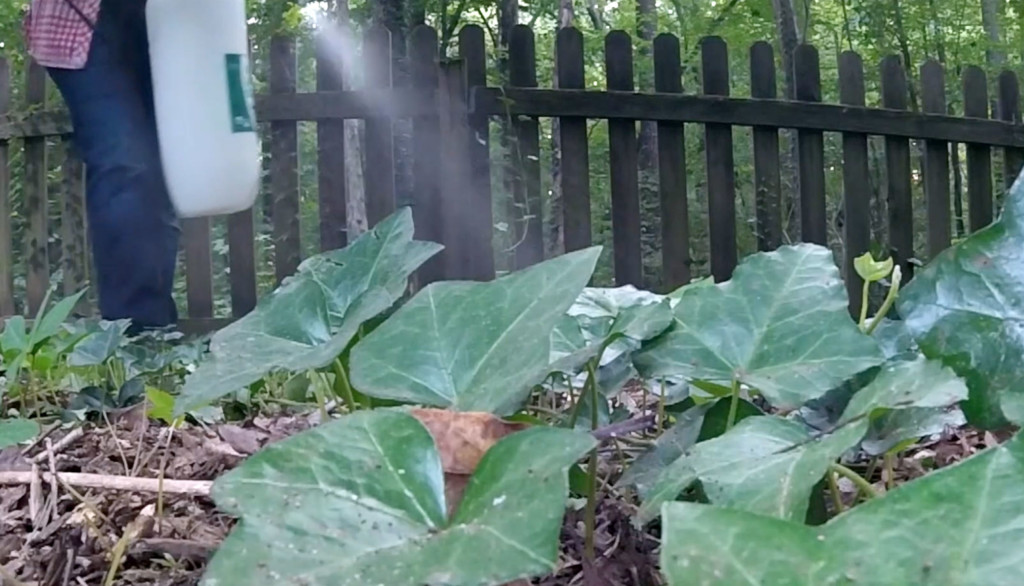 Pour the mixture in a garden sprayer and saturate the ivy. Then wait a week.

After a week or so, the ivy should start to die and will loosen its grip on the ground. Use a garden rake to remove the ivy strands from the ground. If any roots resist raking, use a hoe to dig the roots out. This process will be much easier after a rainy day as the ground will be softer. 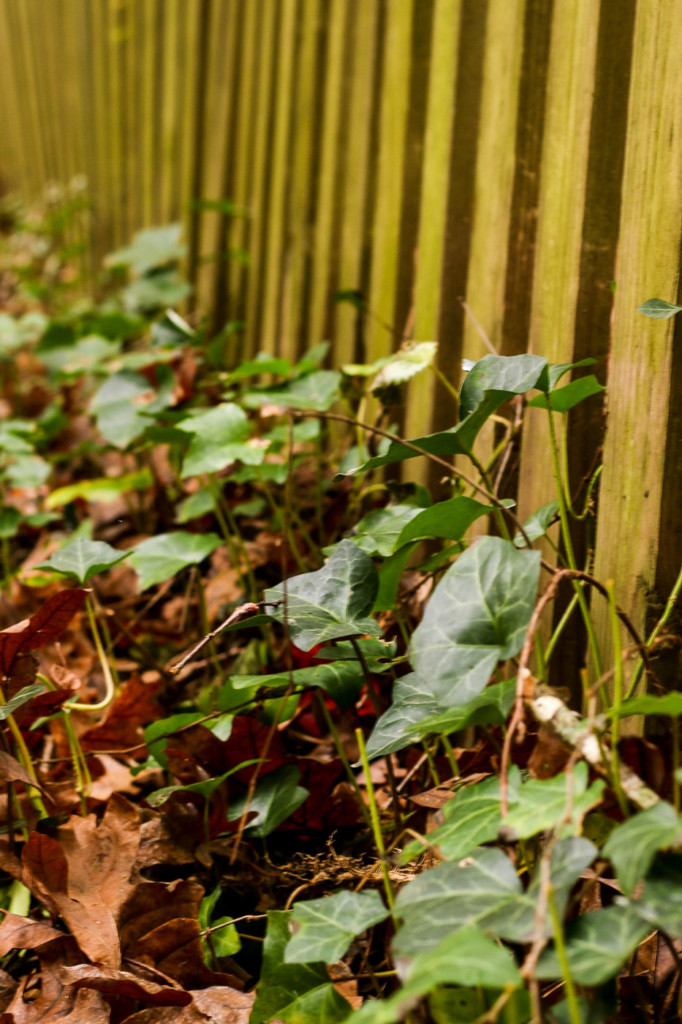 Okay, it’s time for confessions. Have you planted English ivy? Did it take over? Or have you thought it was a pretty element in your landscaping?

Disclosure: This is a sponsored post for STIHL™. I was honored to work with them on this project and was given complimentary products. All words and opinions are my own. I have not been told what to say. As always I am very particular about the sponsors I work with and you will be told if you are reading a post that has been sponsored or in which materials were provided.