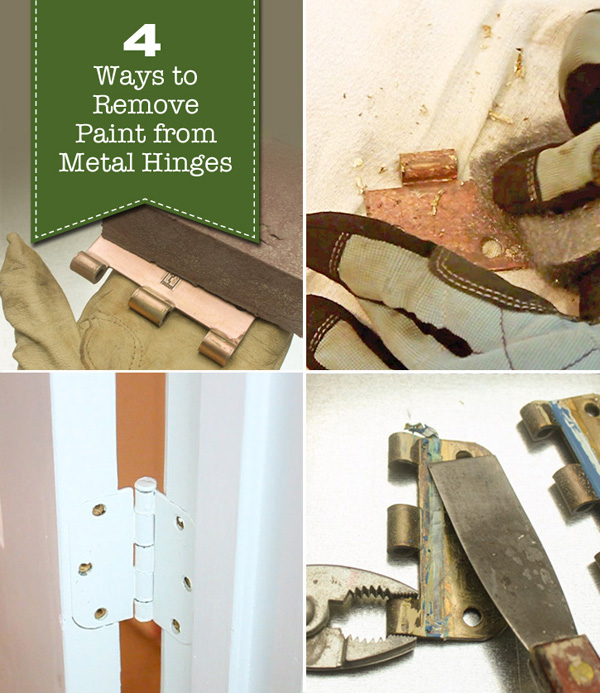 Do you find yourself in the unfortunately situation of having door hinges that have been painted over? I get your frustration. Almost every door hinge in our house has been painted over. Taping off a hinge when you paint a door is not hard to do. You can purchase pre-cut painter’s tape to cover hinges, so there’s really no excuse except laziness. Today I’ll show you 4 Ways to Remove Paint from Metal Hinges, and I’ll tell you which is the easiest (in my opinion.) 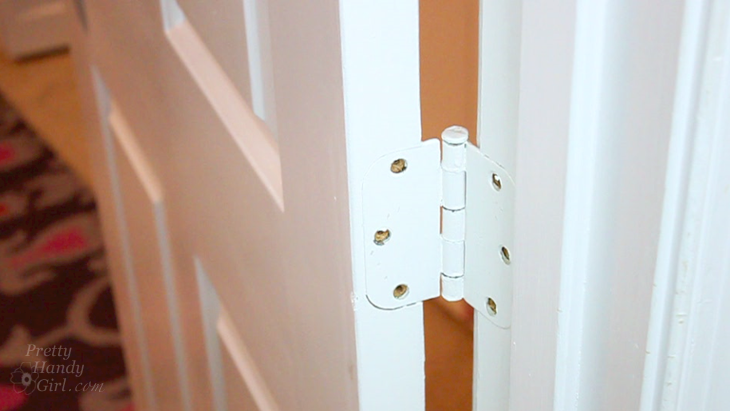 To avoid removing the doors, systematically remove one hinge from each door. For example, start with all the top hinges. Remove them and scrape the paint from all those hinges. Then re-install all the top hinges and remove the middle hinges next. It took me the better part of a day, but eventually all our hinges were beautiful and shiny again. 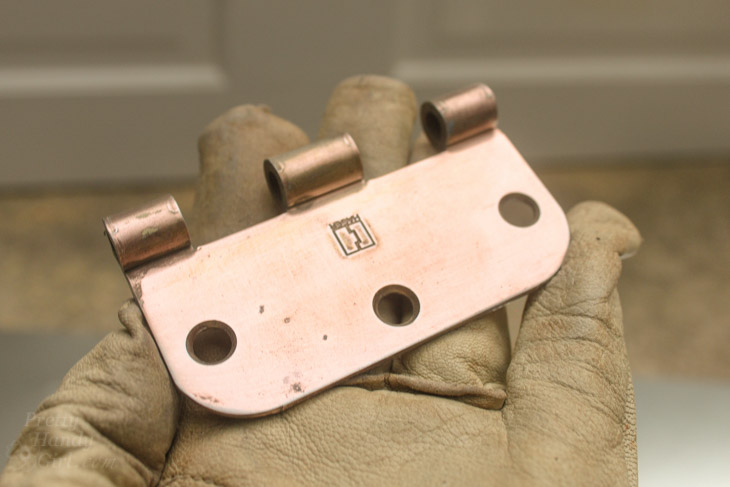 There are four ways to remove paint from hinges. Three of them involve heat, the fourth involves using a chemical stripper.

Alright, let’s get to this.

4 Ways to Remove Paint from Metal Hinges (and other hardware)

Use a paint stripper like CitriStrip (less toxic than other strippers.) Jessica shares a great tutorial for removing paint from a metal lamp here. This is a good way to remove paint from larger items. Especially ones that can’t be put in a pot or crock pot. But, it will also work on smaller items like door hinges. Be sure to wear gloves. 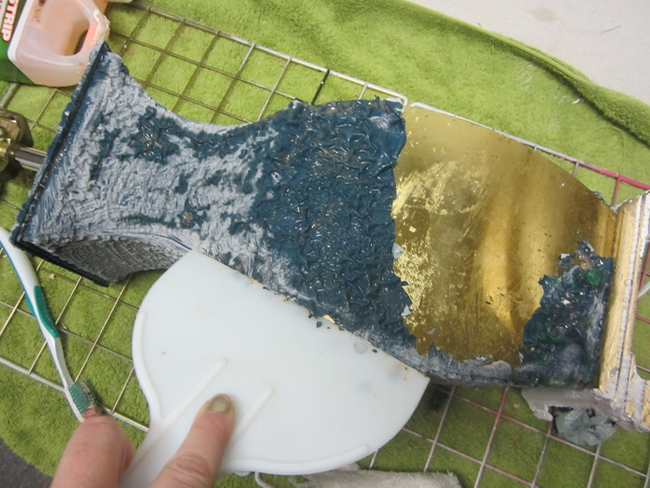 A heat gun is a great tool for removing paint (and stickers.) You’ll need to prep the area underneath to avoid burning anything. A piece of sheet metal on top of tile, concrete or scrap plywood should be sufficient. 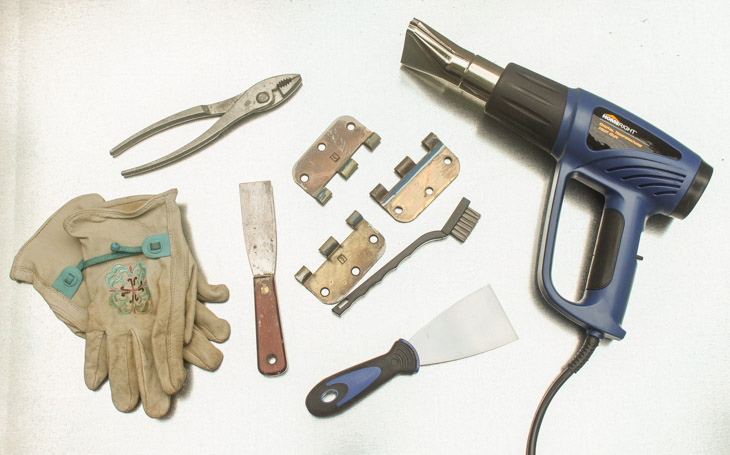 Turn on the heat gun and allow it to heat up. Lay the hinges onto the sheet metal or protected work surface. Concentrate the heat onto the hinge. 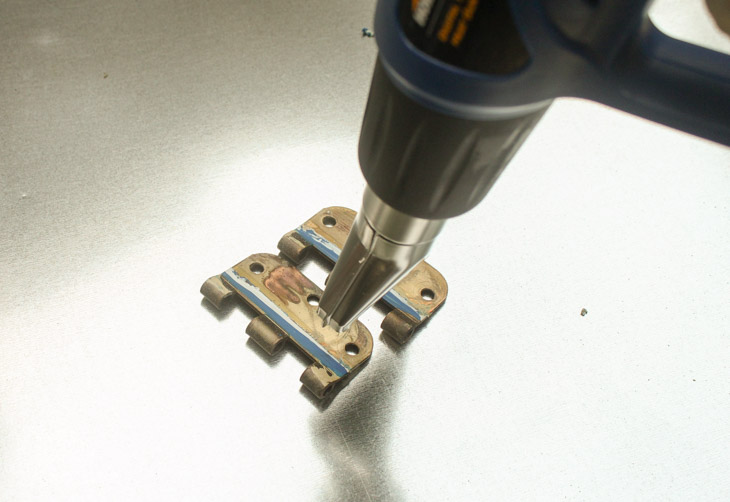 In a minute or two, the paint should start to soften, liquify or bubble up. Use the pliers to hold the hinge as you scrape the paint off with the putty knife. 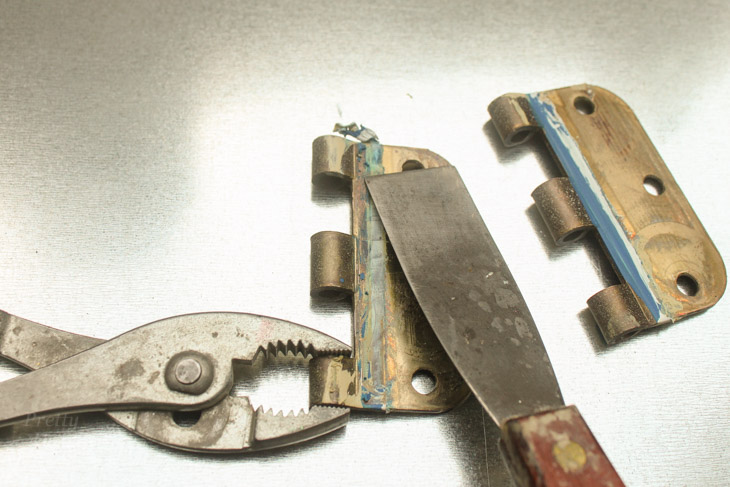 You may need to repeat heating the hinge and scraping to get all the paint off. 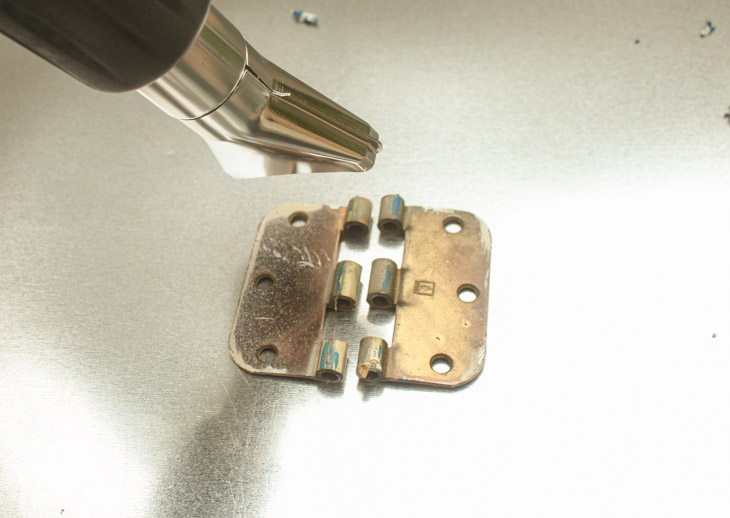 Use the brush to scrape paint out of small groves and crevices. 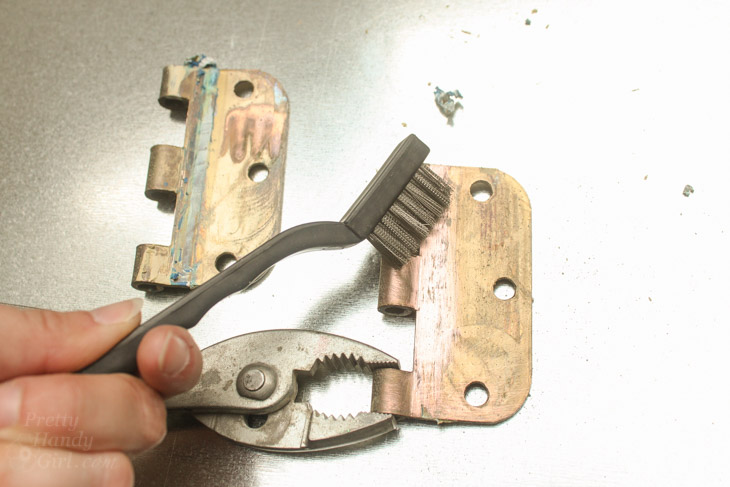 After most of the paint has been scraped off. Use fine grit sandpaper to shine the hinge. 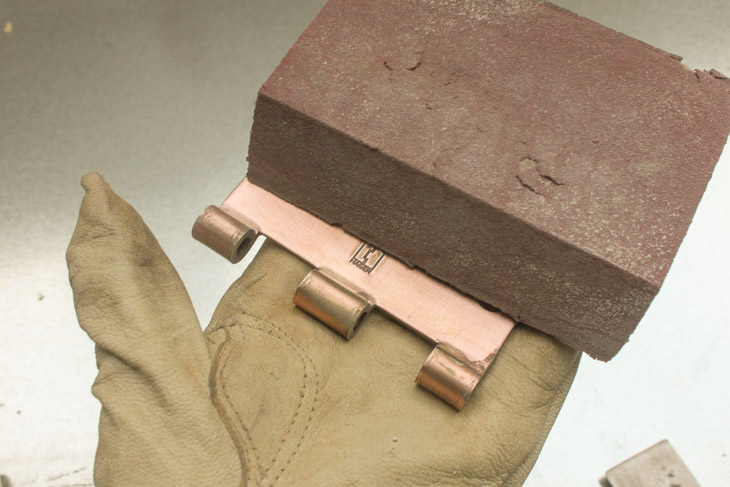 Finish off by buffing it with steel wool. 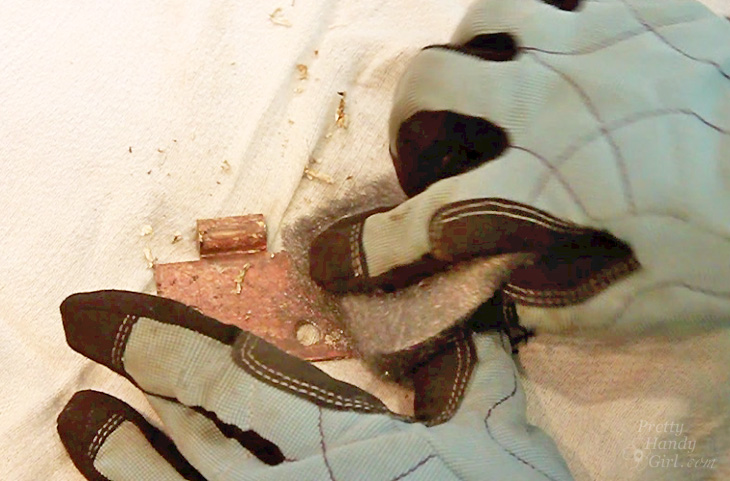 Grab an old pot that you don’t use for cooking (or buy a cheap one at a thrift store) because it’s going to get nasty. Fill the pot halfway with water and set it on the stove on high heat. Set the hinges in the pot and boil for 15-20 minutes. Lift the hinges out with tongs and wear gloves as you scrape and buff off all the paint. This video will give you a good idea for how to remove paint from hinges using the boiling water technique.

Similar to boiling the hinges in water, you can put the hinges in a crock pot, turn it on high and let them cook overnight. In the morning use the same steps as with the boiling water. You should have a cheap crockpot reserved for this purpose. Don’t cook your food in this crockpot.

There you have it! 4 Ways to Remove Paint from Metal Hinges! Which is my favorite? I prefer the boiling water. Not only is it chemical free, but it’s also the quickest technique. Plus, you don’t need to go buy a heat gun if you don’t already own one. And I try to avoid using chemicals of any kind.

Re-install the hinge and clap yourself on the back for saving money and saving something old. 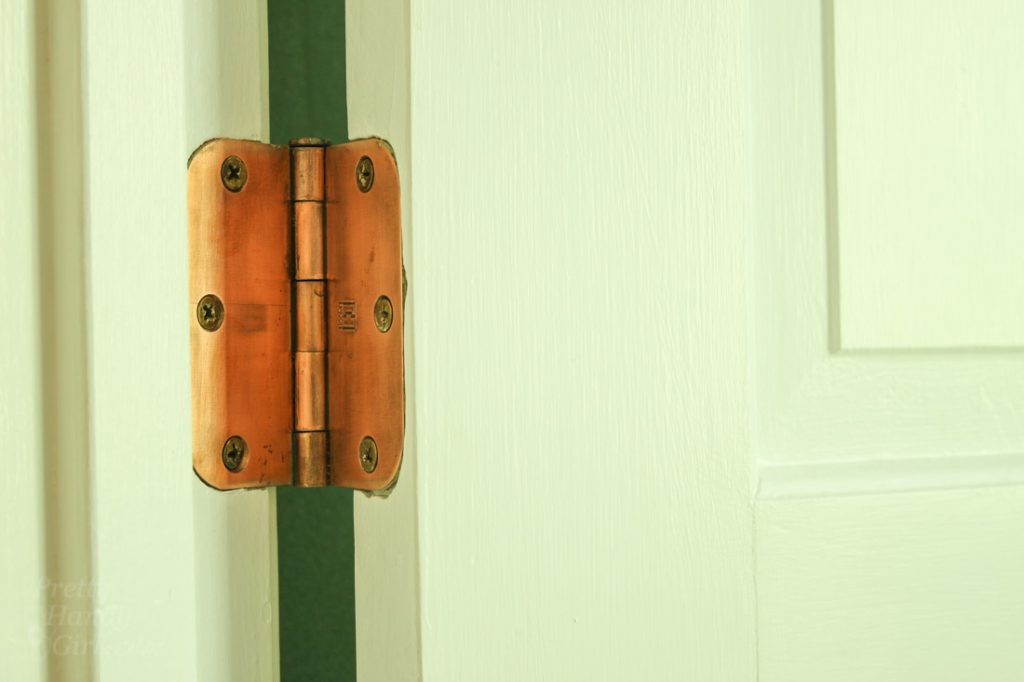 It is worth noting one weird thing that happened was the hinges have a pretty copper color instead of the brass color I think they originally were. Any chemists out there have the explanation?

Disclosure: (I’ve included affiliate links for your convenience. I earn a small percentage from a purchase using these links. There is no additional cost to you. You can read more about affiliate links here.)

DIY Books to Enjoy this Summer
Scroll to top
We use cookies to ensure that we give you the best experience on our website. If you continue to use this site we will assume that you are happy with it.Ok