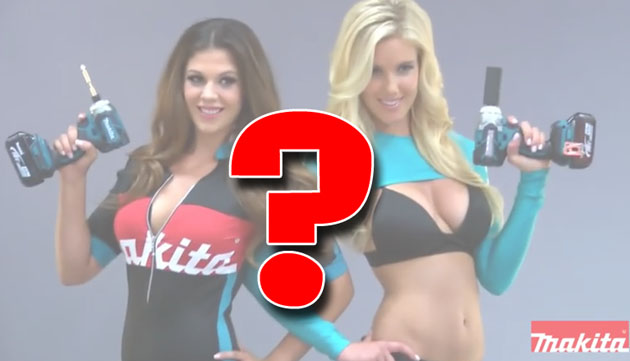 It’s 2018, and I’m Still Wondering Where are the Real Makita Girls?

Back when I first published this post, I never thought I’d be resurrecting it from the archives. Then Simone Giertz shared this tweet and my anger and frustration at Makita boiled over again. The video Simone was referencing has been taken down by Makita, but here’s another upload of the Makita Girls behind the scenes video:

It’s been three years Makita, why are you still using the same tired marketing campaign? Your transparent attempts at finding spokeswomen who actually use power tools is laughable. My 14 year old son even pointed out that Miss Makita can’t actually build shelves with a sander. Sure, she can finish them with a sander, but any avid power tool user would not choose a sander as their favorite power tool (give me a recip saw or a sliding compound miter saw any day over a sander!)

In the three years that have passed since I was angered by Makita’s Miss and Senorita Makita campaign, I added four expensive power tools to my toolbox. And you know what? I consciously steered clear of the Makita brand because I don’t want to support a brand that objectifies women and doesn’t recognize that there are many of us that use power tools for more than “building shelves.”

Get it together Makita! It’s 2018, time to retire the women in bikinis and find a woman who gets her nails at the hardware store (not the salon.) There are so many women who can guide potential buyers to purchase tools based on their expert opinions. Let’s see this campaign retired or start searching for all the women makers, contractors and builders out there. Am I right?

Oh Makita, why did you have to go and do this?!

Makita announced its 2015 Makita Girls and where you can go to meet them. Initially, I reserved my opinion until I learned more about these new spokesmodels. But, after reading their bios, I was angered. Not a single mention of enjoying woodworking, building or carpentry. Where is the DIY love? What will they talk about at these appearances?  I’m disappointed that Makita would choose their spokesmodels for looks and not skills. And, I question their decision to maintain an advertising program that perpetuates the stereotype that only men use their tools.

Don’t they realize that they are alienating a huge growing market of DIY women? Would I have been offended if they selected an attractive woman who had Mad-DIY skills? Definitely not.

If they wanted beautiful women using tools, there is no shortage of kick ass female builders out there. This ever changing world of Do It Yourselfers is filled to the brim with amazing “Real Makita Girls.” Some of these women have the right to hold their Makita tools proudly. They can tell you the difference between a bevel and a miter; a cross cut vs. a rip cut and they know that brushless is a good thing and has nothing to do with long flowing locks of hair! These women choose quality tools that are strong enough to stand up to the current and future projects they are completing.

Am I angry? Yes! Am I going to stop using Makita tools? No, because frankly they make great tools. My Makita 10″ Compound Sliding Miter Saw is my baby: 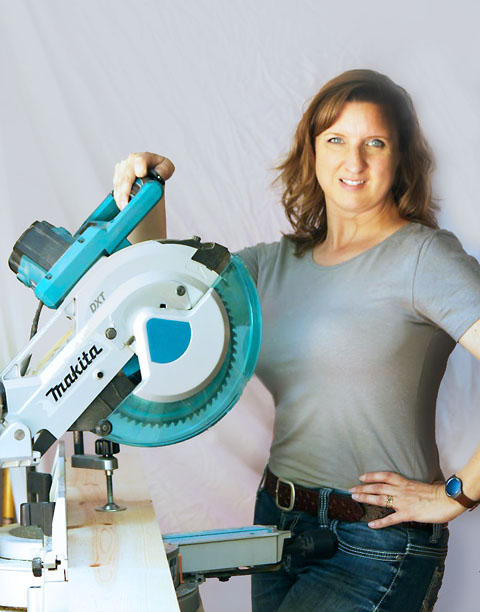 It’s the first tool I’d truly cry over if it was stolen. This saw has been with me through 100’s of projects, a kitchen remodel and countless fixes. I have never had to adjust the laser or to square up the tool. It is a quality power saw made with aluminum and metal parts, not cheap plastic. But, despite my undying love for my Makita tools, their advertising tactics make me embarrassed to confess my love.

Do you want to help me change the search results right here and now? Let’s show Makita what a Real Makita Girl is. Please visit these accomplished builders and DIYers. Pin their images and title it “Real Makita Girl” or use the hashtag #RealMakitaGirls. 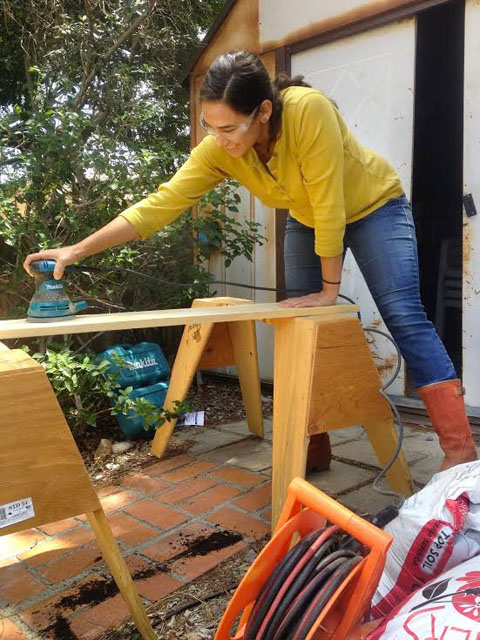 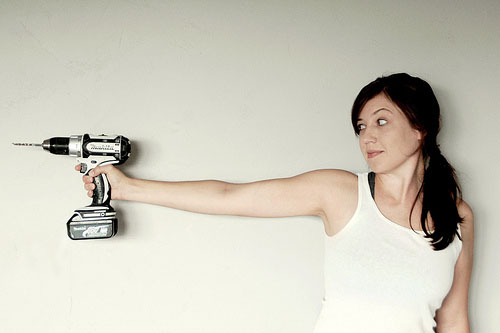 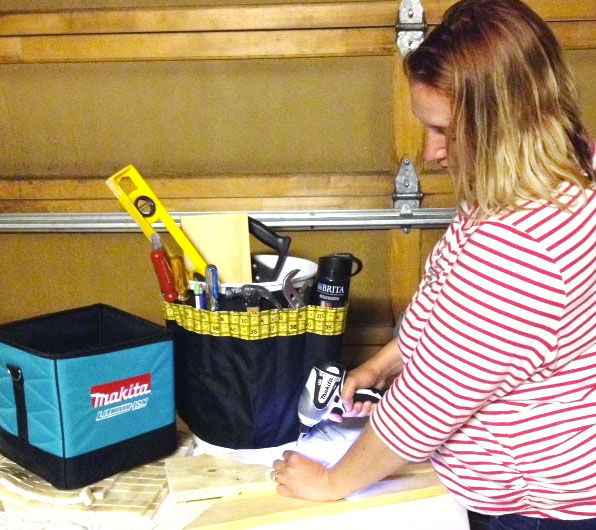 Hey, do you use Makita tools, too? If so, show me your…tools! (Email me pictures of yourself using your Makita tools, to PrettyHandyGirl (at) gmail.com. I’ll add your photo to this post.)  Let’s take over the search term “Makita Girls” and show them what a Real Makita Girl is! 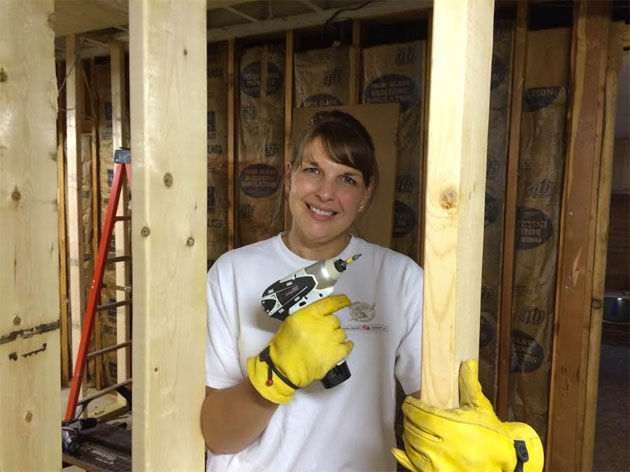 Mary Hunnicutt another one of many #RealMakitaGirls 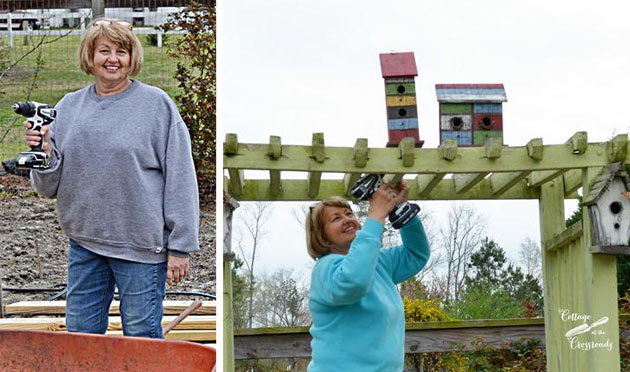 Jane from Cottage at the Crossroads

In the meantime, I have to ask:

Makita, when you make awesome tools, why do you have to stoop to such slimy advertising tactics? The 1980’s called, and they want their tight spandex and scantily clad women back. Please remove the blinders and take notice of your growing customer base.  Women are shopping in the tool department. They are your consumers. They are smart and savvy. They want to purchase tools that will last. They want to hear about what makes a Makita tool great and why they should spend a little more to purchase a tool that won’t fall apart in a year or two.

A few weeks after this post was published in 2015: I spoke to Wayne Hart, the communications manager at Makita tools after this post initially published. We had a pleasant conversation and he seemed to understand my concerns about the Miss Makita and Senorita Makita models. I offered to let Mr. Hart make a statement to my readers but never heard back from him. In the meantime, the program has continued in 2016 and 2017, but I noticed that at least two of the models have used some of the tools outside the program. At least that’s some progress, right!? What do you think about tool companies continuing to use models as spokeswomen?

Disclosure: The opinions expressed in this post are my own. Sara, Kit, and Kim are DIY women I admire. They gave me permission to use their photos, but that doesn’t mean that they endorse what I have written in this post.

Saving Etta: Chapter 17: Good Neighbors
Scroll to top
We use cookies to ensure that we give you the best experience on our website. If you continue to use this site we will assume that you are happy with it.Ok