As I walked around the house assessing anything else that needed removal before the mold remediation, I had that nagging feeling again. Although I had tested the flooring for asbestos, I felt like I was missing something. I looked up a phone number and pushed “call” on my phone. The span of five years disappeared as a familiar voice said, “Hello.”

Never in a million years did I think I’d hear from Jeff again, but here I was in the present day hearing him on my phone.

“Hi Jeff. This is Brittany Bailey. You had worked on my house five years ago to get rid of asbestos vinyl flooring in our kitchen.” I quickly explained.

Surprisingly he remembered who I was (probably because he doesn’t meet too many women who decide to renovate their kitchens all by themselves).

We talked for about 15 minutes and he kindly talked me through all the possible locations I should test for asbestos. I had checked them all until he mentioned the joint compound. He told me he was in the area and could stop by to show me where to take the samples from.

Jeff stepped out of the truck and said, “Nice to see you again. It has been a few years, right?”

“Yes, It’s been about five years.” I replied.

I was immediately pulled back to that day. Just when I didn’t think things could get any worse on our minor kitchen leak, the restoration team manager called me to tell me he had bad news. They had begun to remove the flooring to get rid of the mold and found a layer of linoleum flooring underneath that had tested positive for asbestos.

“What? You have to be kidding me! Asbestos is only in old homes. Our house was built in 1978.” I exclaimed.

Sadly our home was built at the tail end of the asbestos window. Even though the products were no longer allowed to be manufactured, stores were permitted to sell any asbestos products still on the shelves. Unbelievable! You’d think they’d outlaw everything. I read there were reports of asbestos related deaths as far back as 1940 and yet no one pushed to remove asbestos from building materials until the late 70’s.

Within a day Jeff pulled up to our suburban Raleigh house and began to seal off our kitchen. It looked like a remake from the movie E.T. The doors were sealed with plastic and big “WARNING: Asbestos Beyond this Point” signs were taped to the doorways.” 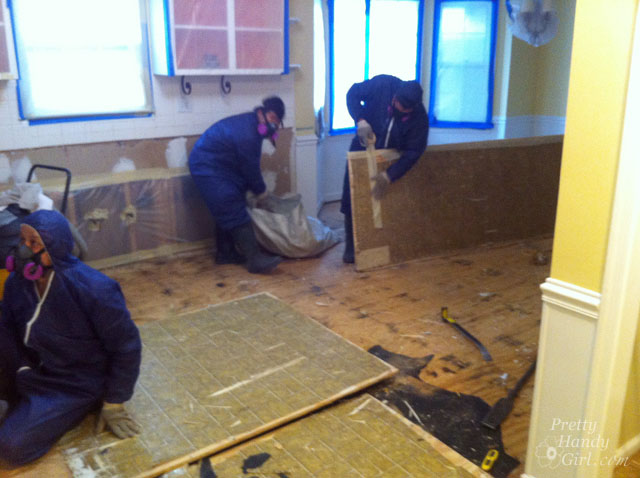 The crew set up a metal stall in the driveway. Jeff explained it was a shower and the workers wore disposable suits and underwear. When they finished with the removal process, they went directly into the shower and stripped down to clean any trace fibers off their skin. Then they could get dressed in their street clothes.

The workers hauled out big square sections of our flooring with the edges taped off to prevent any asbestos fibers from flaking off the edges. Then all the disposable clothing and tarps were double bagged and hauled away in a big truck. 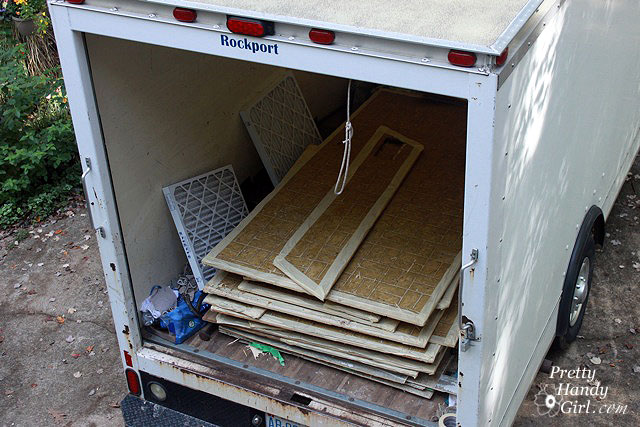 I found the entire process fascinating and terrifying at the same time.

After our own asbestos abatement, I didn’t think I’d see Jeff again. I actually hoped I wouldn’t under a business need. But here I was shaking his hand five years later, and talking about taking asbestos samples from Etta’s interior.

I warned Jeff about the black mold and he grabbed a respirator from his truck. We walked around the house and he showed me how to take samples all the way down to the studs in each room. He showed me how to keep the area wet with a spray bottle and how to clean up after taking a sample. I felt less nervous as Jeff explained that as long as you take precautions, the risk of exposure is minimal.

Jeff turned toward the kitchen and pointed out a strip of vinyl flooring peeking out from under the subfloor. How could I be so stupid not to test for multiple layers? I lamented all the additional samples I needed to take and felt like turning the task over to someone else.

Jeff reassured me by saying, “You got this.” Then he and I discussed any other areas I should sample. (Most of which I had already tested.)

After Jeff left, I reflected that every time I felt discouraged and wanted to give up on this massive project, there was someone urging me to keep going. Many of the people who have spurred me on are online friends and readers. When my spirits are low and I feel like giving in, I get an email or a comment from one of my readers telling me if anyone can save Etta, I can. I am eternally grateful to everyone who has been “in my corner”. It seems I have amassed a huge squad of cheerleaders along the way.

I deposited the double bagged ziplock of samples into the truck and washed my hands using the outside hose. My eyes scanned up and down the street, staying aware of my surroundings when I am alone. The weather was hot and humid, but there was a nice breeze blowing. I left the truck door open as I sat in the driver seat and ate my snack. Suddenly my eyes focused on movement in the bushes next to the driveway. A disheveled looking man popped out of the bushes in the vacant lot next door. He saw me looking at him and walked toward me, hand outstretched. I hesitantly shook his hand as he started talking to me. He said his name was William, but the rest of what he said was unintelligible. His words were slurred and his eyes were yellowed. I finally deduced that he was either drunk, on drugs, or mentally off. Wishing him a good day, I quickly walked back into the house. I was slightly shaken, but relieved that he hadn’t made any movements toward me beside the handshake. My self defense instructor’s voice spoke up in my head. “Don’t let anyone in your personal space. Be firm and don’t be afraid to come across as rude. Women are too worried about being polite, and that’s a real problem.” I had definitely failed that lesson. I vowed to keep my distance from William and not let any strangers get close enough to shake hands in the future.

Back inside I cleaned up any dust from the plaster before heading to the lab. As I walked through the kitchen something caught my eye. I stared at a hole in the drywall where I had removed a cabinet the day before. What was that? I saw a horizontal aqua colored stripe inside the hole. I tugged the wallboard around it and uncovered bead board with a chair rail on top. “Oh, so pretty.” I said aloud, my words muffled by the respirator. I knew I had yet to get the asbestos results back from the drywall, but I couldn’t stop myself. I kept tearing into the wall. A layer of shiny laminate wall board sat on top of the chair rail. Behind that was more drywall. The layers fell to my feet as I pulled back the years like opening a trick present that has been wrapped numerous times.

A layer of lattice and flowers revealed itself. I carefully removed the wallpaper adhered to cardboard and set it aside. The beautiful pattern might look nice in a shadowbox frame, I thought to myself. There were many found objects I was collecting in the hopes of displaying them in the house when it was finished. 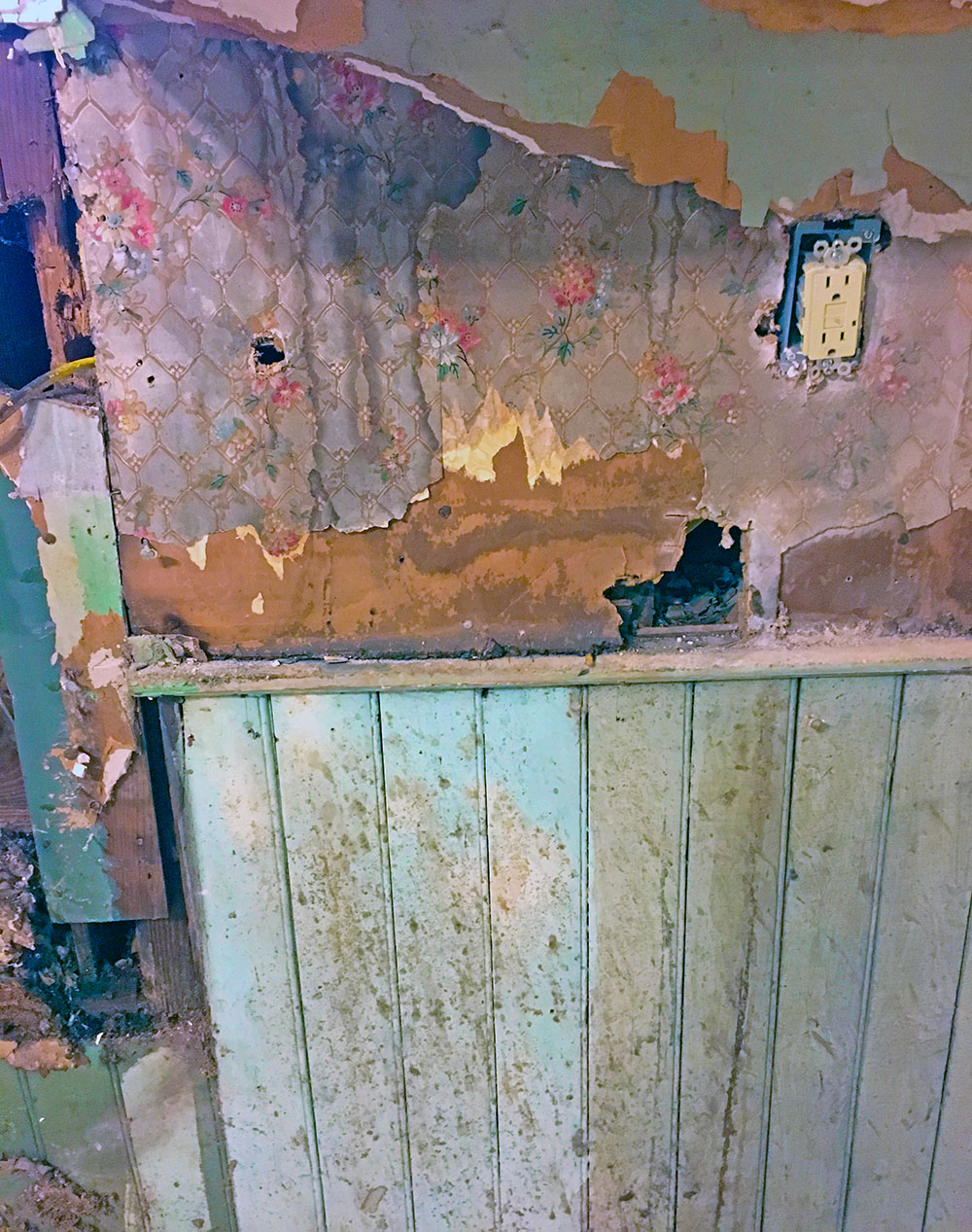 Behind the cardboard was wood lathe. I pulled a few pieces out and the carcass of a petrified mouse fell out of the wall. I scooped out the remains of her nest between the two studs. Suddenly, I stopped digging in the wall. What I saw behind the nest made me jump with excitement.